When I was at FUDCon Milan I came across a guy playing a weird musical instrument (see photo below). I haven’t seen it before and I have no idea how it is called, but the sound of it was just great. Is here anyone who knows what it is? Tell me. Thanks!

This is a short trip report from FUDCon Milan 2011. Josef already described in long detail the joys and challenges of Milan city (and Italy in general), so I’ll stick with just the conference itself.

In the beginning we received a pretty T-shirt. I love receiving T-shirts. Then we explored the university. Our place consisted of two auditoriums and several smaller rooms. I have no idea how many people attended, I guess over a hundred. As we began to fill up the main auditorium, I quickly noticed the insufficient resource – electricity. There was only one usable socket at the end of the room. With a dozen people connected we quickly blew the fuse. Soon I started to envy people with netbooks and their 8 hours on-battery time. 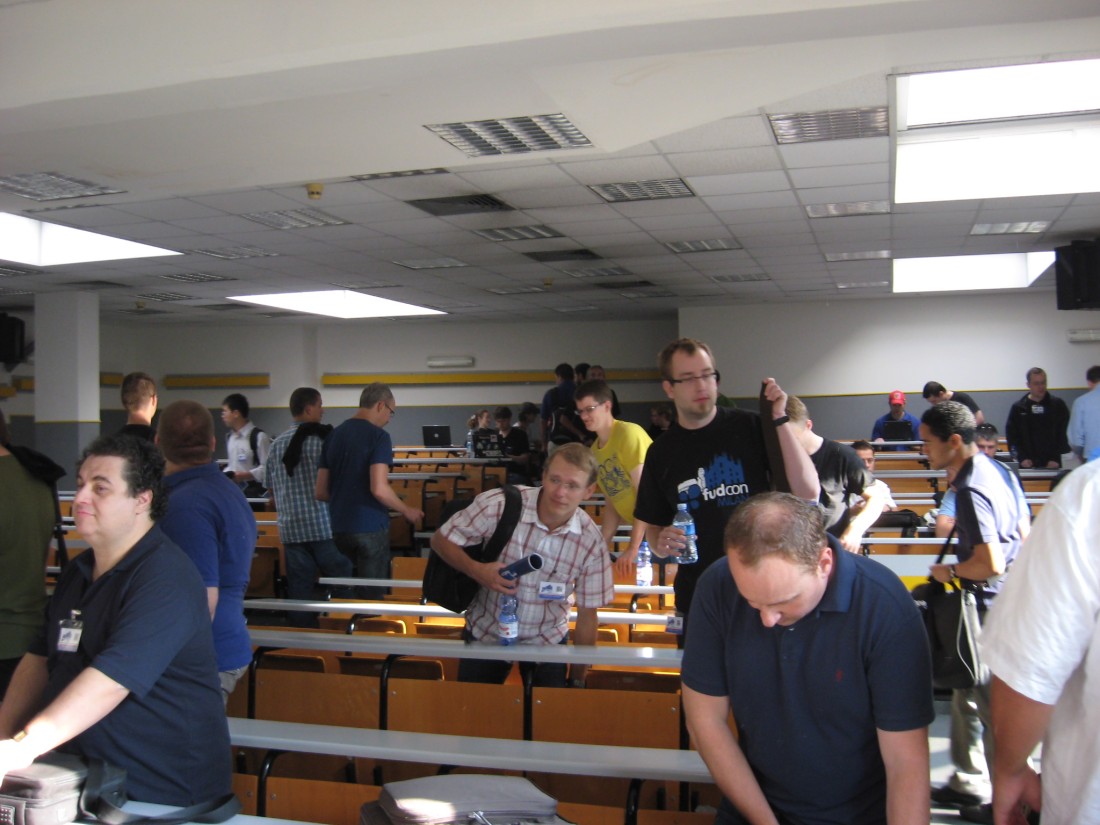 After Jared welcomed us there was a barcamp. People proposed talks and we then voted them. The number of proposed topics and the available time and rooms matched quite well, so almost all talks were given the opportunity.

The first two talks I have attended were about RPM future & alternative packaging and about how Fedora is made from Rel-Eng perspective. The RPM talk was surprisingly relevant to us (us == Fedora QA team), because Jindřich Nový spoke about libsolv (IIRC the name), a library for dependency solving that should be incorporated directly into RPM or serve as a middle-men between RPM and YUM. All Fedora tools could then use this library for depsolving tasks. The API and capabilities should be better then what currently YUM can offer. (We just need to wait some time until everything is implemented, of course). That was extremely interesting, because we fight with depsolving issues in our depcheck test, as part of AutoQA test suite, and it’s a nightmare. This could help us substantially.

The second talk from Dennis Gilmore gave me a little perspective how RelEng team works when they create a new Fedora release. It is quite complex and they touch basically our parts of Fedora infrastructure. But I have now a little better idea and I’m glad for it.

And then… there was the AutoQA talk. Our talk. I talked about the recent changes in Fedora QA and about the near future. Josef Skládanka talked about his baby, ResultsDB. You can see the slides. There were some comments afterwards. There was a request whether we could execute upgradepath sooner, before you actually ask for push to stable in Bodhi. I believe we can’t do that (at least right now), but I’ll try to think about it more. Also we can’t execute your tests right now unfortunately, but it’s our goal in the future. And Josef promised to create KVM images (for server and client machines) for people interested in hacking AutoQA, because the installation is allegedly too difficult. Well, it is difficult. But you’ll have to learn how to use the Autotest+AutoQA framework even with the provided KVM images, so both approaches seem equally difficult for me. Simplification of server+clients deployment is also our near future goal, stay tuned.

I have attended a few more talks and Saturday was over. There was a FUDPub and hackfest day on Sunday. I did not participate directly in any hackfest, but I was present for Git tips&tricks and Java SIG sessions. I used the time to catch up with all the emails that accumulated during the trip.

Overall it was quite short FUDCon. But it kind of matched the experience of the last year’s one in Zurich. I met some people, I learned something new. But I am still curious how the american FUDCons look like. Are they different? I hope I will see some of them too in the future.